From the Southern Ocean to tropical waters we focus on several species of flying seabirds. Among them, here is 2 examples of species living in different marine habitat: The Great frigatebird in the Mozambique Channel and the Wandering albatross in Crozet Island. 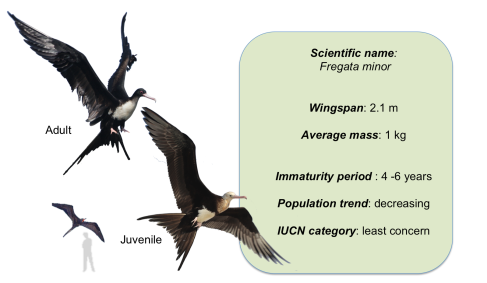 Frigatebirds are atypical seabirds with no waterproof plumage. It’s the only seabird that never touches the sea surface. This species is able to fly during several weeks without landing. Frigatebirds use thermal air currents and travel long distance searching for their prey : flying fish and squids. Their flight adaptation is a key for surviving in tropical waters where the resource is patchy and unpredictable.

« For the first time, we deployed telemetric devices on juvenile’s frigatebirds. The results we found are surprising: first, juveniles stayed close to their native island and foraged 50 km far for from the colony. At this stage the birds are able to fish by themselves but independence is very progressive. Parental care is provided by the female only until more than 8 months after hatching.

Later juveniles decide on their own to disperse. The positions of the birds collected months after months were not expected. While the adults find easily the roosting places in the scattered islands of the Indian Ocean, the juveniles on the other hand are constantly on the move. The distance covered and the duration of their trip without any landing is really impresive. It’s seems that the wind pattern around the equator determine their trajectories during the first months of their life …”

Tracks of juveniles frigatebirds after dispersal

“I equipped 10 juveniles of wandering albatrosses in the colony of Crozet Island with Argos/GPS devices that allowed us to track them at sea for up to 11 months. When they decide to leave the nest, flying for the first time of their life, albatross juveniles are completely alone with only a few adults still present in the colony at this period. Thus, the youngs have no way to observe and learn from others how they must behave at sea. At the beginning they need to rely exclusively on an innate, genetic, navigation program that took them rapidly hundreds of kilometers north of Crozet were they start to forage in the sub-tropical waters of the Indian Ocean. They will progressively improve their foraging capacities and acquire new navigation cues in order to optimize their strategy and survive to the harsh conditions and resources scarcity that characterize the pelagic ocean. Their strategies are diverse with birds making big loops in the central Indian Ocean, some going straight to rich Australian coastal waters and others even push on the West Pacific Ocean. There immaturity period will be very long since they will stay at sea for, at least, the 3 following years, during what some of them will probably circumnavigate the Austral Ocean several times, flying tens of thousands of kilometers. They will eventually find their way back to or close to their natal ground in order to start their adult life and prepare to breed. They will start to reproduce at around 6 to 10 years old.”